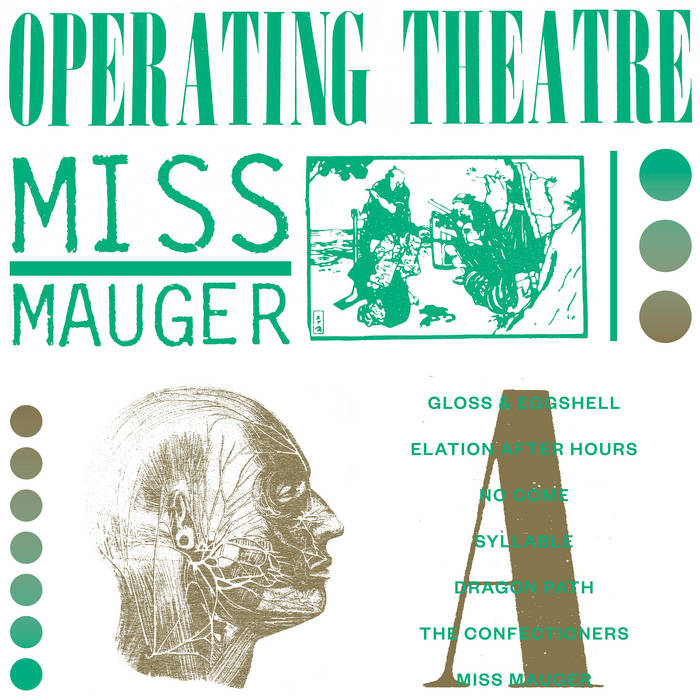 Featuring the vocals of future Hollywood actress Olwen Fouéré alongside pulsing synths, brass, a vocoder and the electro acoustic production talents of Doyle himself, it's the first time a Fairlight sampler was used in an Irish studio setting and gives a prescient but alternative take on the new wave sound that came to dominate the charts soon after.

Not quite pop nor full-blown electronica, the 'Miss Mauger' album is a rare creature in the pantheon of Irish experimental music, largely ignored and misunderstood when it was first released, it's now getting the full reissue treatment it deserves – with two extra tracks thrown in for good measure. 'Austrian', which was originally release as an A-side by CBS records in 1981 and 'Sir Geoffrey', another recording from that era.

The next release after Operating Theatre's short stint on U2's embroyinic Mother records ended was the double CD Operating Theatre - The Early Years, released in collaboration with the Dublin Electronic Arts festival in 2006, and now re-packaged and re-released here. As a theatre company they continued producing experimental work until 2006. Doyle, the musical maverick at the heart of the act, continues to produce to this day and has released 30 albums Fouéré, who provided the vocals and a theatric element to the group (an almost essential part of any early 80s synth act) went on to a successful movie career that has recently seen her appear in major box office productions like Mandy and Fantastic Beasts.

This album is a heady snapshot of some early pop explorations by one of the great modern composers and a rare insight into an underground new wave sound that was bubbling up through the Irish capital during the late 70s and early 80s.

Cut from the same DIY or almost post punk cloth as our recent reissues of Stano and Michael O'Shea, this is another example of a maverick artist producing largely instrumental work far removed from the mainstream pop industry or what little of it existed in the country at the time. Defiant outsiders following their own distinct paths but Doyle's work especially acts as a precursor to the new wave and synth inspired movement that's starting to gain traction around him.

Roger Doyle: Production and Fairlight Computer Music Instrument on all A-side tracks; piano, synths and drums on B-side tracks and vocals on B5.
Olwen Fouéré: lyrics and vocals on B1 and B4, vocals on B3.
Tom Mathews: lyrics for B3, B5 and pretend film director on B1, B2.
Liam Stack: trombone on B1, B3.
Jolyon Jackson: production on B1-B4, bass guitar on B4.
Paddy Gilsenan: production on B5. Recorded for the Dave Fanning Show on 2FM 1981.
All music composed by Roger Doyle © PRS/MCPS 1981-1983.

Bandcamp Daily  your guide to the world of Bandcamp

Benji B talks about his new compilation ‘Deviation Classics’